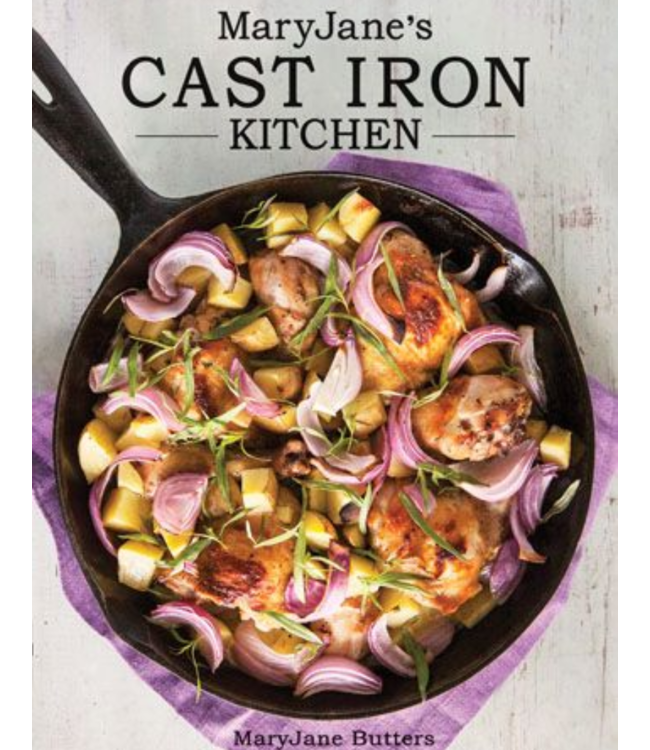 Whether we’re urban or suburban, straight-up city or downright country, cast-iron cookware holds a special place in our hearts. For generations, it’s the one thing that has never changed. Or worn out. With its rich history and formidable staying power, who among us doesn’t have at least one of Grandma’s skillets?

Not only is it cheaper than its modern-day, fancy-pants counterparts, it’s non-toxic. And if your great-granmama were around to utter admonitions, she’d tell you a thing or two about proper kitchenware (and manners), and then hand you a cast-iron griddle and show you how to make a mess of biscuits the likes of which you’ve never tasted before.

From Asparagus and Mushroom Quiche with Potato Crust to Chicken and Biscuit Skillet Pie to Ham Dinner on the Half Peel to Rhubarb-Raspberry Pandowdy, MaryJane’s unpretentious recipes for breads, breakfasts, soups, casseroles, main dishes, and pies and other desserts that include step-by-step instructions accompanied by beautiful color photography will make you feel as if you were sitting with her in her farmhouse kitchen in the outback of Idaho.

Preparing meals in this tried-and-true cookware just got easier with MaryJane’s farmhouse recipes and cooking tips that include her unique take on cast-iron cookware care.

MaryJane Butters publishes MaryJanesFarm magazine from her organic farm in Idaho and manages several product lines. This is her seventh book.

By using our website, you agree to the use of cookies. These cookies help us understand how customers arrive at and use our site and help us make improvements. Hide this messageMore on cookies »

Having an account with us will allow you to check out faster in the future, store multiple addresses, view and track your orders in your account, and more.

You have no items in your shopping cart